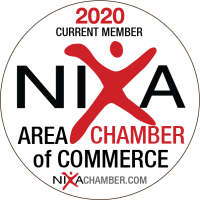 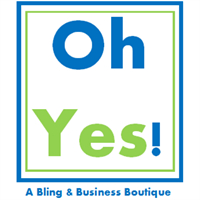 Members: $15 by 12 noon on previous Friday; then $20. Registration the day of the event is $25.
Future Members/Guests: $30
Note:  When registering online, discounts will be applied during checkout.
Please note the NACC Policy as approved by the Board of Directors:
Chamber Functions Involving Reservations:
For Chamber functions involving reservations: reservations not canceled at least 48 hours in advance, refunds will not be available.  At that point, we have already given a solid headcount to our caterers and you should come anyway.  You never know what you are going to miss.

You may give your QR code to another person for entry.  So, if you cannot attend, bonus someone else. 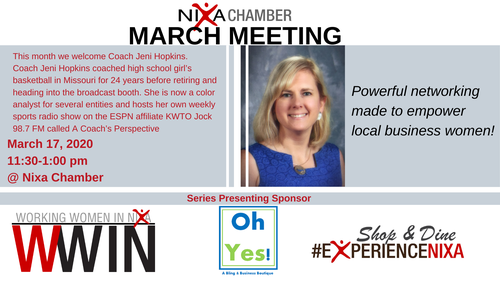 Coach Jeni Hopkins coached high school girl’s basketball in Missouri for 24 years before retiring and heading into the broadcast booth. She is now a color analyst for several entities and hosts her own weekly sports radio show on the ESPN affiliate KWTO Jock 98.7 FM called A Coach’s Perspective (www.acoachsperspective.com).   Coach Hopkins is a graduate of Greenwood Laboratory School where she was a three sport athlete. Hopkins (then Burnett) left her high school career with 17 school records, four All-Conference, three All-District, an All-State honor, and six AAU All-Star selections. Hopkins then signed with Pittsburg State University in Pittsburg, Kansas.  Her college team won the prestigious MIAA conference championships her sophomore year. After leaving PSU, Hopkins was a member of the Missouri State University Handball team that won four national titles with Hopkins gaining All-American honors three years.

Coach Hopkins has had the honor of coaching twenty college scholarship athletes, ten All-State players, 27 All-District players, 32 All-Conference players, five All-Ozarks players, and five McDonald’s All-American nominees.  She spent 16 years at Hillcrest High School where her program appeared in seven district championship games, and finished in the top half of the conference fourteen out of sixteen years, being named Conference Runner-up of the power Ozark Conference three times. The Lady Hornets won the District Championship in 2005-06 and advanced to the Quarterfinals for the first time in school history finishing eighth in the state in Class 5. Again, in 2010, the Lady Hornets won the District Championship, with Hopkins being, again, named Coach of the Year. Winning back to back District Championships in 2015 and 2016 and a State Final Four appearance, and two more Coach of the Year honors, Hopkins retired with career victories of 332 games in 22 years as a head coach.

Hopkins is currently the Past President and Media Coordinator for the Missouri Basketball Coaches Association (MBCA) and has served on the Executive Board for over 20 years.  She was named the 2013-2014 National Basketball Coaches Association Missouri Coach of the Year for her work in her program and her diligent efforts to promote the game of basketball state-wide. She is the director of Court Talk, a promotional luncheon in Springfield throughout the season and also has several camps and youth development teams. In 2018 she was awarded the Filbert Five Award given by the Missouri Sports Hall of Fame as a top five basketball contributor in the state of Missouri.

She is also President of the Springfield Area Sports Hall of Fame and is on the Boys and Girls Club Steak and Steak committee. Hopkins also leads, through her show, the mentoring and leadership program C.H.A.M.P.S. along with authoring two biographies and a children’s series.  She is also a sports counselor to high school and college athletes and is a full-time school counselor at Greenwood Laboratory School.

Hopkins is married to Scott and they have two children, Hailey Jo, 22, a graduate of the University of Arkansas and Hayden, 19, a student at Missouri State University.  The Hopkins reside on a farm in Bolivar, Missouri where her husband, Scott is a full-time cattle farmer.